We planted almost 4000 trees and shrubs between January and March 2015. I’m pleased to say that they’re almost all thriving (a very few didn’t grow but generally we have a much higher survival rate than would be expected). Many of the trees are growing out of their plastic tree guards now, some have grown by over a metre. 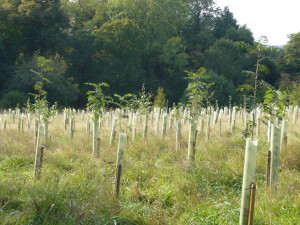 Planted earlier this year, some have grown over a metre

The wild flower meadow that we planted on the subsoil excavated from the pond got off to a slow start (due to very dry weather in April?)  but eventually bloomed and is still a mass of colour. 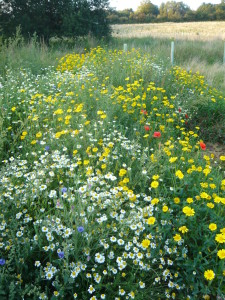 The ponds both failed to hold water and spent much of the summer bone dry. I’ve now extended the small pond and lined it, if all goes well it should hold 20 cubic meters of water when full. 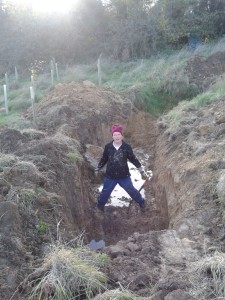 Pond extension (with a lot of help from a JCB)

Unfortunately there has been some significant damage to the existing 14-year-old trees caused by grey squirrels which shred the bark to get access to the sweet sap. A few trees have died and others have lost their tops. There’s not very much I can do to prevent this,  squirrels have no natural predators to keep their numbers in check (although there’s talk of reintroducing pine martens in England which could help).

The tree nursery which I created at the bottom of the field is now stocks with seedlings, cuttings and seeds – some of which I’ll be planting out this winter. I also grafted some fruit trees with quite a good success rate so I have more apples and pears to plant out.

I now have a small colony of honey bees living at Upton Cheyney, in a top bar bee hive – a design favoured by environmentalists as a less intensive, kinder, healthier place for bees to live. Winter will be a challenging time for them but at the moment they’re still flying strongly and storing up honey to see them through to the Spring. 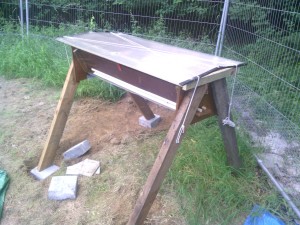 Top bar bee hive, occupied at one end by a very small colony of honey bees

We planted about 40 apple trees last winter, I wasn’t expecting fruit for some while but one of then provided me with an apple in September. There are many other fruit bushes (including what will become a prickly gooseberry hedge) so I’m hoping for a good crop next year.

Where the trees were temporarily healed-in over the winter we planted potatoes, onions, garlic and oca – which all grew successfully – and a few other things which sadly failed due to drought, slugs, weeds and general neglect.

Parking was a problem for us last winter. I’ve recently cleared and levelled an area which will provide plenty of parking. I’ve laid turf re-enforcing mesh but now we must wait for the grass to grow through it, so there won’t be any extra parking until next summer.

The intended storage building (something between a shed and a barn) has yet to happen – I still have to produce drawings and get planning permission.